The Platform and the Special Promise 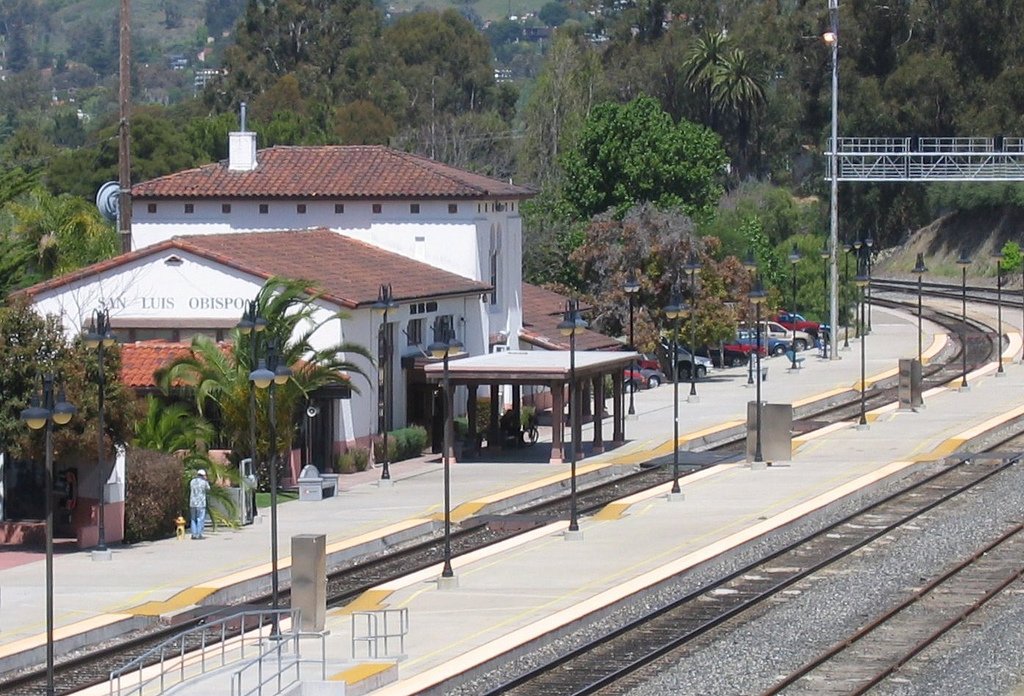 Thirty years ago, in 1990, starting from my hometown of LA, I did a complete circuit of the US on trains. I touched the South, NYC and Boston, Maine (which was then not accessible by trains, but where I spent the most time of all), Cleveland, Chicago, Milwaukee to the Pacific Northwest, and down through Martinez and down the Cuesta Grade to SLO and LA.

It was nearing the end of this long strange trip that San Luis Obispo first grew on me not only as a uniquely cheery place, but as possessed of a special kind of California promise. And the largest part of that promise was robust health. All I needed to see this was to glimpse the people standing on the platform. After all my train transits and transfers around the country, after that month of drab grey platforms, looking out onto cold and colorless crowds elsewhere, here were people on the SLO platform who were actually colorful and vibrant in every sense: apparently healthy as surfers, flashing neon and day-glo tank tops and shorts, for the most part active and leggy and tidy. Thus even this, the very northern tip of Southern California, possessed not only a Mediterranean climate, but also so many suitably healthy souls to thrive in it.

Across the subsequent thirty years, the SLO platform — like the city and county — remains breezy and wide open, yet it's much more than a whistle stop,  bleached by sun and haze in that special Central Coast admixture. Unlike so many other such platforms in the US, it’s a place where people can spread apart for seemingly half a mile without having to crowd each other – and all while remaining full of health and color. Really, in 1990, you didn’t see any platforms or passengers like it from the train, not anywhere else in the US. Now in 2020, it’s a commercial and even residential hub too, and likely far busier now than then, but it still hasn’t lost its neighborhood scale.
There are all kinds of platforms just like this as one ventures further south, all the way to San Diego. The sensibility of the platform extends outwards to the sense of Southern California space that keeps us relatively healthy.
San Luis Obispo, city and County, by most measures is very stingy towards developers. There are still fewer souls in the whole County, in fact, than there are in my own City of LA Council District, only one of fifteen in a city that dominates a county that even has far more than double the population of LA.

Yet the persistent vision for our California cities we have been offered in recent years has been completely contrary to this bucolic hybrid model of light, space, and vibrant health. We have been assured, typically by politicians with extensive ties to the development industry, that density can be elegant, that growth is inevitable, that community gardens can outshine private backyards, that the city planner’s awkward shibboleth — “immigration, copulation, and relocation” — must inevitably drive more and more masses into ever smaller spaces, and that public transit rather than personal transit is the special future.

At the State and big city level, the same people who have most failed the poor and the indigent over the past three decades are now controlling California's public health crisis. They have been oddly surprised by the fact that for-profit nursing homes, often loosely controlled by profit-extracting real estate investment trusts that monetize Medicare and supplements, have proven the top hotbeds of malady. They have taken the rash and Constitution-hostile measure of shutting down not only gyms but public beaches and hiking trails to to-day's healthiest citizens. (It was my prediction early on that the real leadership wouldn't come from politicians, it would come from artists and poets and surfers, and though I was speaking figuratively, I see it more or less happened literally, in Newport Beach, Huntington Beach, San Clemente, and Dana Point). For all their hortatory edicts and counter-edicts, politicians and media never seem to talk nutrition or building immunity — and they never talk of that most prudent of public health measures: to make cities less crowded, and to make for less crowded cities.

The longtime California native knows what the public health mandarins miss too willfully: that small was once thought beautiful, that private space keeps people from tripping over and wheezing on each other, and that sunny public spaces are a key part of robust public health. It’s not a wonder to me that San Luis Obispo has had, despite its difficulty attracting medical personnel, a very favorable pandemic track record. Preventive medicine is the best medicine of all, and the Central Coast’s concept of open space has saved it from the horror shows we’ve seen of late elsewhere.

JF Mailander is owner and publisher of Nine Sisters Press.

A note on J. Carroll Clark
In LA, Diversity is Everywhere – Except Where It Matters
Keith Jarrett
Comments